Every few months, we do a book roundup of books sent by authors around the country (and in some cases world). We peruse these books and choose the top 10 or so books to feature on WE Magazine for Women.

More than you can see by Barbara Rubin

At seventeen, Barbara’s daughter Jennifer is in a horrific car accident and sustains a traumatic brain injury that sends her into a two-week coma. Once she awakens, a unique disability presents itself: Jenn lacks any traditional method of communication. Unable to speak or function on her own, Jenn must relearn basic life skills in a rehabilitation facility while Barbara and her family struggle to piece together their lives, now forever changed.

Til All these Things be Done by Suzanne Moyers

Set against the rich but often troubled history of Blacklands, Texas, during an era of pandemic, scientific discovery, and social upheaval, the novel offers a unique—yet eerily familiar—backdrop to a universal tale of triumphing over loss.

Even as dementia clouds other memories, eighty-three-year-old Leola can’t forget her father’s disappearance when she was sixteen. Now, as Papa appears in haunting visions, Leola relives the circumstances of that loss: the terrible accident that steals Papa’s livelihood, sending the family deeper into poverty; a scandal from Mama’s past that still wounds; and Leola’s growing unease with her brutally bigoted society.

Enough – a Memoire of Mistakes, Mania and Motherhood by Amelia Zahry

A bicultural child of a Malay mother and an Indian father, Amelia Zachry was different from the get-go, never quite fitting in. In this raw, inspiring memoir, she chronicles the long, winding journey that brought her from Kuala Lumpur, Malaysia, to Kentucky, USA—the place she and her family now call home.
A memoir of trauma and healing, mental illness and resilience, culture shock and new beginnings, devastation and triumph, Enough is one woman’s story of learning to make peace with the fact that things are as they should be, even if she sometimes wishes they were different—and of discovering that however far away it may seem, there is always a light at the end of the tunnel.

June 1941. Hitler’s armies race toward vulnerable Leningrad. In a matter of weeks, the Nazis surround the city, cut off the food supply, and launch a vicious bombardment. Widowed violinist Sofya Karavayeva and her teenage granddaughter, Yelena, are cornered in the crumbling city.
Equal parts war epic, family saga, and love story, Lost Souls of Leningrad brings to vivid life this little-known chapter of World War II in a tale of two remarkable women—grandmother and granddaughter—separated by years and experience but of one heart in their devotion to each other and the men they love. Neither the oppression of Stalin nor the brutality of Hitler can destroy their courage, compassion, or will in this testament to resilience.

What a Trip by Susen Edwards

In this fast-paced coming-of-age novel we meet Fiona, an art student at a New Jersey college who is brilliant, beautiful, and struggling to find herself. Through her eyes we relive the turbulent culture of sex, drugs, and rock ’n roll, the first draft lottery since World War II, the Moratorium to End the War in Vietnam, the Kent State University shootings, and the harsh realities of war for Americans in their early twenties.

SELF HELP SLUT? Starting with a Clean Slate by Katharine Branham

The trademark Self Help Slut™ was channeled by Katharine Branham to use in a workbook series to dispel the belief that only a select few are worthy of the spiritual walk.

The Shell and the Octopus by Rebecca Stirling

This is the story of Rebecca Stirling’s childhood: a young girl raised by the sea, by men, and by literature. Circumnavigating the world on a thirty-foot sailboat, the Stirlings spend weeks at a time on the open ocean, surviving storms and visiting uncharted islands and villages. Ushered through her young life by a father who loves adventure, women, and extremes, Rebecca befriends “working girls” in the ports they visit (as they are often the only other females present in the bars that they end up in) and, on the boat, falls in love with her crewmate and learns to live like the men around her. But her driven nature and the role models in the books she reads make her determined to be a lady, continue her education, begin a career, live in a real home, and begin a family of her own. Once she finally gets away from the boat and her dad and sets to work upon making her own dream a reality, however, Rebecca begins to realize life is not what she thought it would be—and when her father dies in a tragic accident, she must return to her old life to sift through the mess and magic he has left behind.

Son of a Basque by Deborah Driggs

After the sudden death of his father, young Mark Vergara, the oldest son of immigrant parents, was thrust into the role of principal breadwinner, working hard in the beet fields of Colorado to support his family. After joining the Army Air Corps and flying dozens of combat missions, he bore the physical and emotional scars of his time in the service, yet he was satisfied he had fulfilled his father’s final wish that he do right by his family.From World War II to the Vietnam War, this tale of a military man who was also a devoted family man is based on the author’s own experiences as a proud son of immigrant parents, a distinguished soldier, a loving husband and father, and a loyal friend.

ACE Your Life: Unleash Your Best Self and Live the Life You Want by Michelle P. Maidenberg, Ph.D.

ACE Your Life: Unleash Your Best Self and the Life You Want to Be Living offers another way. Michelle P. Maidenberg, Ph.D., MPH, LCSW-R, explains how to create a life and legacy of love (both of self and others) and fulfillment. Predicated on acceptance, compassion, and empowerment skills, Maidenberg’s approach has transformative range, working for those who feel slightly “stuck” and are seeking personal growth and enhancement as well as those with more complex “stuckness” caused by trauma, cumulative stress, or other significant challenges.

Make Your Mess Your Message: More Life Lessons from and for my Girlfriends by Shari Leid

We’ve all had unique—and often messy—life journeys. You know … the good, the bad, and the ugly. But what if your “messy” life experiences have hidden meanings—that if uncovered could help you have mind-blowing insights about your life’s purpose, and deepen your friendships?

Make Your Mess Your Message encourages each of us to not only give one another the gift of time but to have meaningful life-changing conversations to deepen your friendships and gain insights into your own life journey. 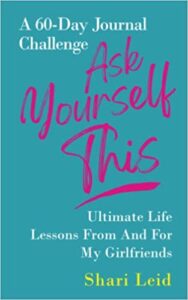 Ask Yourself This: Ultimate Life Lessons from and for my Girlfriends by Shari Leid

While you may not have a professional life coach, you have your girlfriends—your ride-or-die friends, your new acquaintances, your colleagues—and now you have my friends as well. Ask Yourself This takes you on a journey of self-discovery as you reflect and journal through its pages.

Perfect for readers who loved Station Eleven, California, and Gold Fame Citrus, 48 States is a one-of-a-kind dystopian thriller about the dangers of extremism and the power of love and forgiveness. When author Evette Davis is not writing novels, she co-manages San Francisco-based public affairs firm. 48 States is her third novel, and she’s currently at work finishing the Dark Horse trilogy, with the final book slated for publication in 2023. Her work has also been published in the San Francisco Chronicle.

Women on the Wall by Robin Rivers

For 500 years, the once powerful order of the Sibylline has kept the identity of its future prophetess hidden in the most famous painting in the world. Amid the chaos of post-World War II France, one woman discovers their ancient secret and its ability to transform a fragmented world.

This rich alternate history binds two women beyond time, each fighting to restore sight to a world blinded by the power and control of men. The fate of the world rests on their courage to reclaim the ancient feminine powers of the Sibylline. Woman on the Wall is a sweeping fantastical tale of intrigue and hope for us all.

A far cry from the traditional saccharin romance, Alice R Bishop’s Triple Threat delivers love, sex and dark secrets, all wrapped up in a plot that perfectly captures the zeitgeist of 21st century dating.

Fast-paced, sexually graphic, and a plot with a host of relatable twists and turns, this debut novel not only has the potential to grip the nation in a way that Fifty Shades of Grey did ten years ago, but offers a page-turning escape from today’s daily strife.

Based on the glowing Amazon reviews currently amassing, Triple Threat and the talented Alice R Bishop have a bright future in prospect.