Fall of Poppies is Worth Reading 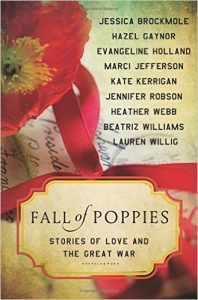 Fall Of Poppies is an anthology that has settings and writings related to World War I.  These historical fiction stories delve into unique experiences that are told from both the female and male point of views.  Nine authors share stories of hope, strength, and renewal.  The plots are insightful and interesting.  Readers get a glimpse in understanding what the civilian and military population had to endure.

Heather Webb, the editor and brainchild behind this anthology described the process she went through.  “As a former teacher it was a natural skill for me to keep people on tab.  It started out with a brainstorm about Armistice Day, the idea that tied all the stories together.  The guidelines were any country touched by WWI with the time period either beginning on Armistice Day or ending on it.  I contacted authors I knew who either wrote about this era or were interested in it, and they joyfully came on board.  Anyone who loves history will find this time period perfect to explore.”

One of the most gripping stories is All For The Love Of You by Jennifer Robson.  Through a heart warming plot she describes what an American Captain had to endure when his cheekbones were shattered and right eye lost.  He was able to have a mask fitted by the American Red Cross Studio for Portrait Masks, a civilian based organization that allowed wounded warriors to get fulfillment, flickers of hope, and protection from those who might react negatively to the deformities. But it is also a love story, which emphasizes the importance of a person’s inner beauty, rather than their physical appearance.

Another wonderful story that also shows how facial prosthetics gave a wounded warrior confidence to venture outside again is The Record Set Straight by Lauren Willig. Inspired by the pioneering aviator, Denys Finch-Hatton, Willig writes the character, Nicholas Frobisher, an “Aviator with the Iran Mask.” This story examines how two brothers react to losing a part of themselves, Nicholas his face, and Edward his leg. With the help of his friend, who became his wife, Nicholas was able to realize his worth and regain a sense of purpose. The theme emphasizes how peoples’ personal life is tested during war, and the realities they must live with as peace arrives.

Willig commented, “The tin masks were designed for the maimed soldiers so they would not have to go out in the world and be thought of as freaks.  For me, this was the birth of organizations that pioneered reconstructive technologies. I thought how today’s society is isolated from this current war and compared that to England during WWI where most everyone was touched in some way.  Many of us have less understanding of our soldiers because we are removed and do not comprehend the day to day challenges those fighting must face.”

Readers will also be drawn to the Gone With The Wind comparisons. Willig took that story and beautifully applied it to the World War I time period. There are many of the same elements: an epic war, soldier casualties, and a love triangle where the female lead is in love with one person, but marries someone else.  It also has the Carrington house that becomes a central theme to the plot as the classic book does with Tara.

Another notable chapter, An American Airman In Paris, by Beatriz Williams, brings to life an American pilot, Octavian. Her fans should appreciate how she delved into writing a story that takes place during wartime.  Through her characters, people come to understand the effect World War I had on those who fought it. Readers get into the pilot’s mindset and can relate to his struggles. As with all of her books, Williams explores the historical significance of the era showing how this war, unlike WWII, did not have stand out heroes or villains amongst the leadership.  In addition, she always centers the plot around an object, in this case, a photograph.  This story highlights how the effect of WWI brought about the loss of innocence.

According to Williams, the photograph represents “Octavian’s childhood, his emotional purity and naivety.  Just as he loses that photograph, all of this is lost in the war, when his ideals were crushed. This included the romantic notion that the war could enable someone rather than debase them, when in actuality it was just the opposite.”

One of the most relatable stories to today’s world is Hour of the Bells by Heather Webb. There are a lot of time metaphors as this author plays off the famous quote, “On the eleventh hour of the eleventh day of the eleventh month…November 11, 1918.”  But more powerful is how she speaks for the military families and the effect the war had on one in particular.  Having lost a husband and a son to the brutality of the Germans Beatrix Joubert allows her grief to turn into a desire for revenge.  This story has a woman seeking retaliation against the Germans who she sees as having no moral backbone.  She decides to become a suicide bomber to blow up those that killed her family.

Webb noted, “I hoped to communicate how warfare in the past does relate to the present. I wanted to tap into and draw a parallel between something that happened a hundred years ago and what is happening today within an intense story.  I wanted to focus on a woman who was completely devastated, but instead of becoming down trodden, she turns her emotions of grief into anger.”

Fall Of Poppies has riveting stories related to World War I.  This anthology of historical short stories allows readers to gain an understanding of the war, its aftermath, and how those on the front lines along with the civilians in harms way deal with loss, hope, and reconnecting in what appeared to be a new world. Available on Amazon.

Book Review provided by Elise Cooper – Her blog focuses on book reviews and author Q&As that deal with women and their issues. Books are an important part of our lives and my reviews provide insight to the woman’s point of view both by authors and their subject matter.

Cats Curse First in a Trilogy for This Writer

Wise Woman Collection – The No-Regrets Bucket List is Worth Reading

Worth Reading, Manifesting Gods Love in Your Family

What Color Is Your Brain?®